William Henry Bonney, better known as Billy the Kid was born in New York and as a young boy, moved out west with his family, which was more dysfunctional than most. The history on this man, who died at the young age of 21 is so difficult to unravel because most of what is known about him comes from the sheriff, Pat Garrett who killed him. Garrett's book, The Authentic Life of Billy, the Kid was published after Garrett shot Billy with four other guys after Billy escaped his first arrest by Garrett by killing four guys on the break-out. Garrett completely sensationalized the young gunslinger punk and made him out to be a legend, when in fact he was much closer to a nobody, than a somebody in the Wild Wild West. He was more likely from the Mild, Mild West.

And then there's that weird picture 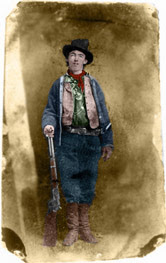 which a actually a mirror image of the young outlaw. (here's an even bigger photo of Billy the Kid, who knew there was a color version available?)

Hollywood, as is often the case, made history even weirder. The first big movie about Billy the Kid was a result of Howard Hughes having the hots for Jane Russell. She started in the film, The Outlaw as a sympathetic young girl who was in love with Billy. In an effort to boost publicity, Hughes aircraft engineered a special cantilevered bra for Ms. Russel's ample bosom and provided promo 8x10 glossies of Jane Russell to the newspapers with more cleavage than all the Leave it Beaver episodes combined. She wore one of those floppy peasant girl blouses that have come back in and out of style since time began. As you might expect - the press was outraged, and huge lines formed outside theaters for a simply dreadful movie - just the kind we often like to feature at LikeTelevision. The movie just begs for a mystery science theater treatment.

Wanna get weirder? Well how about Billy the Kid versus Dracula? Huh? yes, John Carradine as Dracula no less. And the film even features Mrs. Olsen, of Folgers coffee fame as a concerned mother - who makes no java for anyone. As I recall, she does die near the mountain grown area, where the flavor of coffee beans is richest. And while the authorities searched for Juan Valdez, the real killer was of course, Carradine. Got it?
Posted by Joe at 3:35 PM