Whoa - I was able to impress my kids. As any parent knows, or shall I say, a parent who is more interested in being a good parent than a good friend to their children, this is rare air. And for about 5-10 seconds, the duration of their being impressed, I took a deep breath and held it in as long as I could. ahhhhhhh. Exhale.

Here's what impressed them. I told them, girls - your dad was on Facebook over a decade before the founder was born. Incredulous, no way Daddy. Yes... Way! I was able to pull some information from the Wikipedia entry on Mark Zuckerberg, and as we all know - Wikipedia is just like the internet. It is all true (haha). Then I highlighted this part of his bio:

The idea for Facebook came from his days at Phillips Exeter Academy which, like most colleges and prep schools, had a long-standing tradition of publishing an annual student directory with headshot photos of all students, faculty and staff known as the "Facebook".

The truth is, when this old dinosaur went to school at PEA, the Exeter address book was a somewhat new idea. Printing costs had come down, and the concept of an in school address book became a reasonable idea. Thanks to my buddy Whit from Dunbar, I saw this primordial homepage of Facebook from 1974-75 (pic). Back then, we called this - a cover, not a homepage, but that is just semantics. And much to my surprise, whoa - my brother was on the homepage of facebook! And in case you were wondering, my blessed little offspring of nematodes - back then computers looked like this. The year I was born, Jack Kilby and Robert Noyce invented a really fancy thing called an integrated circuit. Noyce founded Intel - which was a new company in 1968. Here's a one minute video history lesson of modern computers- I am certain will leave you laughing, especially that super nifty GPS Garmin wanna be thing in the car.

And once again, thanks to my buddy Whit - I was able to prove my claim, that I was on Facebook well over a decade before the founder Mark Zuckerberg was born. I mean, even to kids today - a picture is worth over a thousand words. Sorry about the focus, but Whit just snapped a quick photo with his cell and uploaded to Facebook using an application in his phone. So my dear, sweet, precious children - I am getting old, and still have every intention of living long enough to be a burden to you... but I ain't THAT olde... yet.
Posted by Joe at 12:36 PM

Even with all the modern updates, we still get slammed by hurricanes from time to time. But it was not that long ago, when there was no warning system at all. The beach could be filled with tourists or locals, the weather gets a little overcast and folks would go about their business as if nothing was out of the ordinary. And then - WHAM. Out of nowhere, a category 4 or category 5 hurricane would blow in and lead to not only massive destruction of property, but also many many thousands casualties.

And, you can thank a guy named Grady Norton, a weather guy pioneer from Miami who worked to create many of the safety features we take for granted today.

Check out this cool episode of a show called Man Behind the Badge for a half hour TV dramatization of Grady Norton and the way they used to try and predict Hurricanes. Pretty interesting, we have come a long way over the last 60 years.

In this show, Grady Norton is played by an actor named Milburn Stone. 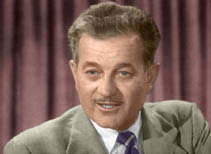 In the real world, Grady Norton looked like much more of a mild mannered science nerd. 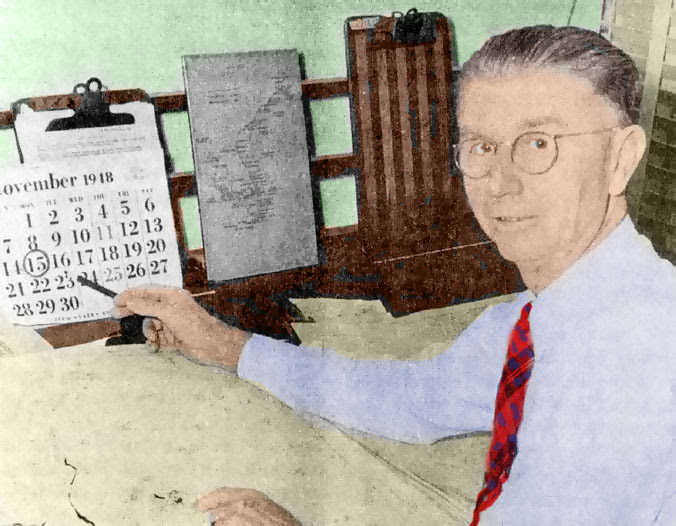 And here we are in late August 2009. Hurricane Bill has just been upgraded to a category 4. Hmmm, something tells me that old Marvelettes song might come into play. You remember the song - Don't mess with Bill. Here's the latest Bill updates from the National Hurricane Center at NOAA.
Posted by Joe at 10:54 AM

Back to Olde School Special

As a child born in the 1950s, I have been having this weird deja-vu experience, wondering to myself if I am in some kind of time warp or something. Growing up as a kid in the 1960s made the whole "revolution thing" kinda weird. I was very young, and actually was innocent too - which is nothing remarkable for children below the age of ten. So people doing drugs, experimenting with free love, and all the peace, love beautiful experience was at best, admirable yet quirky and at worst, gross and creepy. (see Born to Win Trailer for further clarification). And as I listen to people talk on TV about current politics - sorry - but it all has a familiar ring to it. Nice in theory, but people are still those pesky human creatures in spite of the best altruistic intentions. (Despotism or Democracy? provides an interesting angle on this).

To further clarify the point I am trying to make - check out a few movies from back in the 1970s that in retrospect seem downright idiotic. First up - The Harrad Experiment, featuring Tippi Hedron and Don Johnson, the film was all about free love and the desire to express our sexuality without the hassles of marriage - which really just made "us possessive and jealous in our expressions of love". Yeah - just fine thinking - unless you are a child of divorce. From that perspective, it just seems like you have self-absorbed parents who should have been more concerned about the kids "needs" than their own. It gets weird. Don Johnson is a student at Harrad College, where the kids are schooled in free love. Don wants to have sexual relations with a teacher, Tippi Hedron - who undresses herself to try and scare him away. Like I said - weird. Want weirder? In the real world - years later, Don Johnson would marry Melanie Griffith - who was Tippi Hedron's daughter. And don't fret about difficulty at holiday gatherings. They got divorced.

Now before you start thinking I am some kind of Joe Friday, you know, a square who works for "the man" type - rest assured I went through the teenage experience with unbridled passion for hippies, peace, love and all kinds of anti-capitalist ideology. At Duke, I took classes in Socialism and Communism, thinking it was a potential answer to the problems of the world. Jimi Hendrix was my favorite musician, I had an oversized libido (see Guido's Libido) like everyone else, and I might very well have tried a few pharmaceuticals that were not prescribed by my attending physician.

You see, from my befuddled perspective - both sides have a point, but it does no good when nobody is listening. For example - sexuality is a wonderful blessing and gift, and I love children - but is it right that I am subjected to old people in bathtubs musing about hooking up while trying to watch tv with my young daughter. Sorry - make it go away - please. And how could you do that do an Elvis movie about Vegas? Stop it.

And for those who have no recourse but to call people who disagree with them racists - go check out a few movie blasts from the past. The Klansman, is a really creepy, annoying, contrived, preachy film reduced to silliness. And then the real world makes it even weirder. The film features a scene where Linda Evans is raped by O.J. Simpson, who later tries to escape while holding a knife to Richard Burton's throat. The getaway car? - oh my, would you believe it is a Ford Bronco. I believe Martin Luther King's dream (see some MLK video snippets from the I Have a dream speech) - and the Bob Marley song, War - where he wished for a day when the color of a man's skin was of no more significance than the color of his eyes. And I like this dream, and I share in Dr. King's hope that is becomes reality. But calling people racist because they disagree with another man's views who has a different skin color - belittles the indelible images in my brain, of defenseless Black people getting slammed by blasting water from firehouses in a peaceful protest. It cheapens the courage of Rosa Parks, it makes light of a hard and long battle fought by your grandparents and their grandparents before them.

And war is wrong and terrible. (Grand Illusion, Forbidden Games, search for War) No two ways around it. Yet sometimes - a good man must fight to defend the rights of his family and children. Don't buy that? Watch Escape From Sobibor and convince yourself that good men should do nothing. It is not so easy as black and white.

In conclusion - I wish we would spend more time listening to another person's views, rather than shouting louder with this week's talking points. In most cases - both sides have valid things to say, that are heartfelt and true. And as Flannery O'Connor once said - The truth does not change according to our ability to stomach it.

And if this is way too serious - let me say, fine with me. I would rather laugh watching some early George Carlin doing the Hippy Dippy Weatherman.
Posted by Joe at 1:16 PM