Check out the Scooter's journey during Lent. Today... Alabama Bound. You can track him as he rolls down the highway, just send a request to track at lentjourney@gmail.com and wait for a bit fro Scooter to approve you. After approval, go to google.com and click the igoogle link in the upper right corner of the page to see a map, with Scooter updates as he heads down the road.

You can also read about the trip at:
http://www.lentenjourney.com. Happy Trails.
Posted by Joe at 10:15 AM

Cinematic Titanic visited Boston on February 20th and 21st as part of a live riffing mini-tour; we deemed this Too Awesome To Miss, and made the trek from Brooklyn for the Saturday show. The movie being riffed, as we learned right before it began, was a '70s Kung Fu-sploitation wonder called The Dynamite Brothers. It was racist and nonsensical and features a scene where one dude handcuffed to another manages to somehow take his shirt off. 'Nuff said.

I was curious as to how it would feel to see movie riffing done before an audience -- after all, MST3K and Cinematic Titanic are relatively quiet shows -- and whether or not it would really work.

But I need not have worried; in short, it was hilarious and an overall awesome experience. The theater was packed (I'm guessing it was sold out), and the audience was among the warmest I've ever seen. We were laughing at the riffs and at the movie itself; best of all, we got to meet the whole cast after the show, all of whom were insanely nice and took time to chat, take pictures, and sign autographs. Photo report below -- but in case you were wondering -- Cinematic Titanic live scores an easy A. 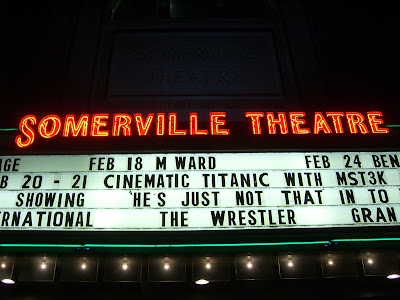 The Somerville Theatre marquee. This was a beautiful, old fashioned theater with a very warm look and feel. It was just the type of place we were hoping it would be in our pre-show, overly-excited, geeky discussions. 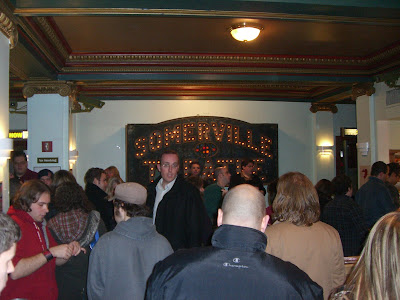 Inside the lobby a few minutes before showtime. The place was packed. 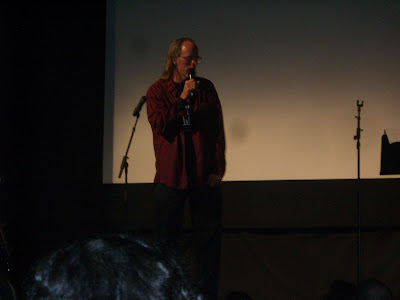 Comedian David "Gruber" Allen -- you might know him as the guidance counselor from Freaks and Geeks -- warms up the crowd. Dave's not a member of the Cinematic Titanic crew, but has appeared in some episodes, and was awesome. 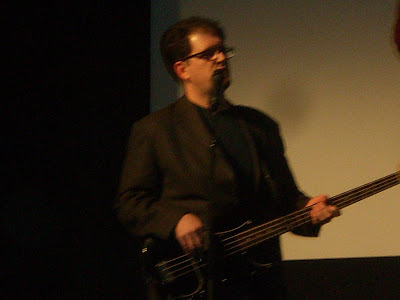 J. Elvis Weinstein took the stage, armed with a bass, and performed a routine with Dave about a radio station that only plays the catchiest moments of songs for our short-attention span culture. The name of the station? K-ADD, of course! 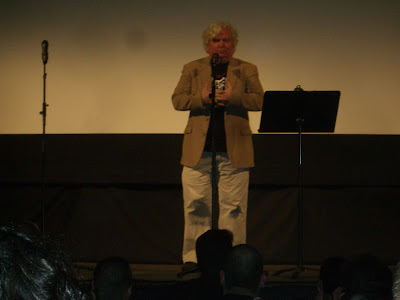 Next up, Frank Conniff -- who I think is possibly one of the funniest people alive -- greets the crowd. 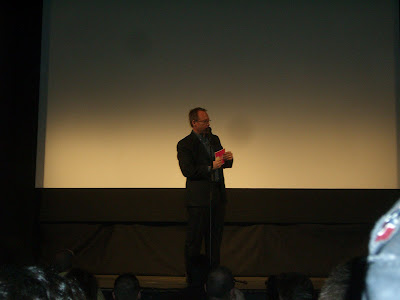 Joel received the biggest ovation, and even brought with him an invention exchange: a small sampler that only plays "Happy Together," torn out of a Valentine's Day card. When played by one's zipper, it creates a "party in your pants." Genius. The Mads could never top that one! 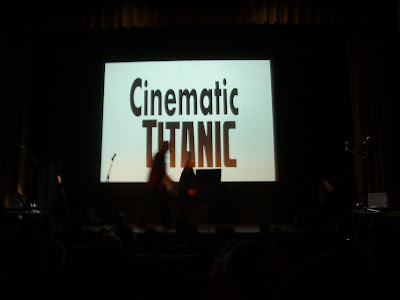 The lights go down before the Cinematic Titanic crew does what they do best. 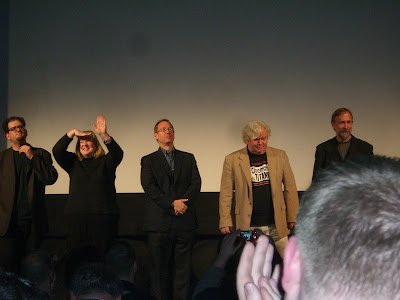 At the end of the show, the cast bowed to a standing ovation. But they weren't done! For an encore, they performed "a best of Cinematic Titanic" to clips of the show's funniest moments, with scenes taken from every Cinematic Titanic episode. Even watching them out of context, it was very, very funny. 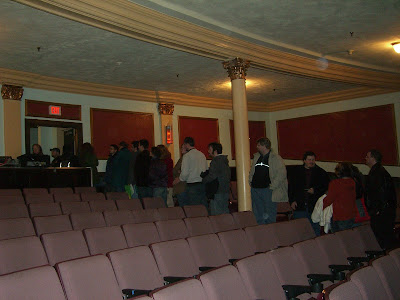 The line forms, which I'm all but sure included the entire #$@%ing audience, for the post-show meet-and-greet. (It actually moved at a pretty decent clip, and everyone was really friendly.) 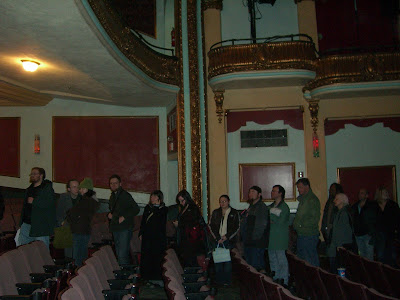 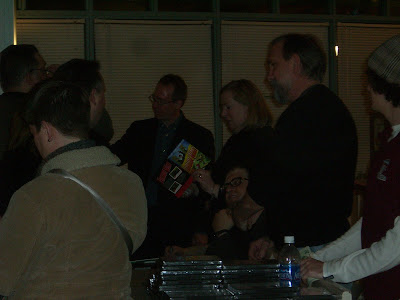 We finally make it to meet-and-greet area, catch a glimpse of the cast... 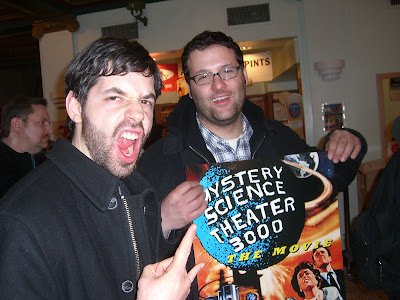 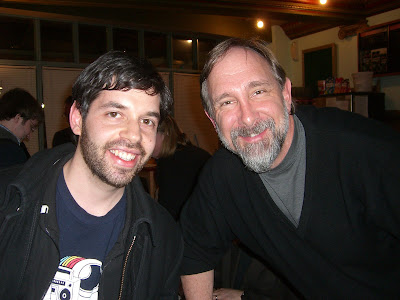 Me and the great Trace Beaulieu. Trace was really, really nice, and took time to actually ask me about my shirt. Are all Minnesotans this cool? (We're not used to things like "eye contact" and "friendly conversation" here in Brooklyn.) 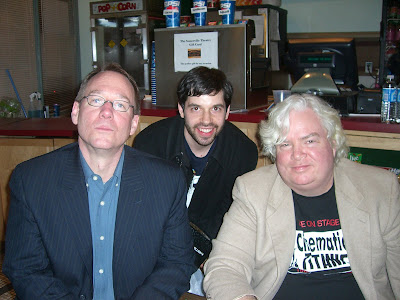 Joel and Frank with a very happy fan. The end!